You’re preparing a new seafood recipe. You have nearly all the ingredients ready, you just have to grab the shrimp the recipe calls for. But as you open your fridge you realize that it wasn’t shrimp you grabbed at the grocery store, but prawns. Will you still be able to cook your recipe? Or will you have to order last-minute takeout?

While shrimp and prawns are different animals, they also have a lot in common. In most cases, you’ll be fine using that prawn in your shrimp recipe, and vice versa. Here, we discuss the differences between shrimp and prawns, as well as their similarities. 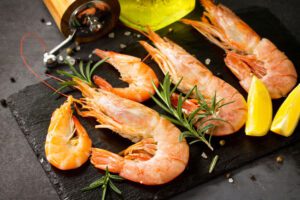 The Anatomies of Shrimp and Prawns

At first glance, shrimp and prawns will look almost exactly alike. But look a little closer and you’ll start to see the differences.

The first difference is their type of gills. Shrimp have lamellar or plate-like gills, while prawns have branching gills.

Another tell-tale sign is to look at their bodies. If the body curls, then you’re looking at a shrimp. If it does not curl, then it’s a prawn.

A shrimp’s front pincers are the largest of their legs. Prawns, meanwhile, have larger pincers on their second pair of legs rather than the front legs. They also have claws on three pairs of their legs.

In general, prawns are bigger than shrimp. While this should not be the only thing you rely on (as you could always have a big shrimp or a small prawn), it is a factor worth considering.

Do They Taste Differently?

The best part is that shrimp and prawns are almost identical in terms of taste. Prawns might be slightly sweeter, but the difference is almost impossible to tell in most recipes. The taste of your dish will be more affected by how your seafood ate and lived rather than if they’re a prawn or shrimp. For example, wild-caught shrimp will have more flavor than farmed shrimp, making it the superior choice.

Is One Healthier than the Other?

Not really. They taste the same and their nutritional value is nearly the same as well. Both are great sources of protein while being low in calories. Both may have a higher cholesterol content, but they also provide a good mount of healthy omega-3 fatty acids to make up for it. Plus, like many other shellfish, they are good sources of selenium, vitamin B12, iron, and phosphorus.

This might be the only difference that will matter to some folks. Since prawns are larger than shrimp, they will cost more. For those on a budget, then, you may want to choose shrimp over prawn for your next meal.

At the end of the day, you can’t go wrong using either shrimp or prawns in your recipe. If you want to save a few bucks, then shrimp may be best. Nevertheless, choosing one over the other will not alter your recipe. What will alter your recipe will be the species’ specific diet and habitat which can vary from shrimp to shrimp and from prawn to prawn.

If you’re looking for the perfect seafood and shellfish for your next meal, look no further than Cape Porpoise Lobster Co. Head to our website to order your seafood today.