These days, the hottest foods are ones that combine delicious taste and natural health benefits. That’s why wild caught salmon has become all the rage. There’s a reason why it shows up on countless “superfood” lists, and is increasingly popular as a healthy option on restaurant menus. Wild caught salmon has real, powerful health benefits that make a great deal of sense, especially when the way these fascinating fish live is more closely examined. 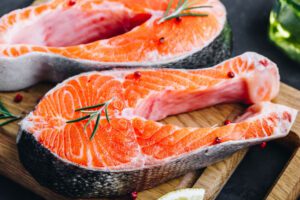 Before talking about salmon, let’s take a look at our brains. It goes without saying just how important brain health is for the quality and longevity of life. What many people don’t realize, however, is that the brain consists mostly of fat. One omega-3 fatty acid that plays an integral role in the nervous system is DHA. It assists with cell signaling, allowing information to move smoothly between the brain, spine and other parts of the body. Higher levels of DHA and other omega-3 fatty acids can increase brain function while preventing neurological deficiencies and disorders.

Salmon are often recognized for the way they swim upstream. As a result, salmon have evolved into being one of the strongest animals on the planet. Salmon gain much of their strength from astaxanthin, a carotenoid and anti-oxidant found in the red algae they consume. Astaxanthin provides salmon with the omega-3 fatty acids they need for neurological and cardiovascular function, and also happens to give them the pink color they’ve come to be famous for. In turn, when humans eat salmon, we receive all of that healthy energy, including the full spectrum of essential amino acids.

Is it that much of a big deal for salmon to be “wild-caught”? It most definitely is. Farm-raised salmon don’t  need the high level of strength to survive in their natural habitat. As a result, farmed salmon are fed an inexpensive diet of grain and meat, usually failing to achieve the pinkish hue that represents healthy amounts of astaxanthin. To compensate, synthetic astaxanthin from unnatural, chemical sources is used. The result is a less healthy, more toxic fish.

Not convinced yet? Order some of our wild caught salmon filets at Cape Porpoise Lobster, or any of our other products, to taste and feel the difference of quality, fresh-caught fish.