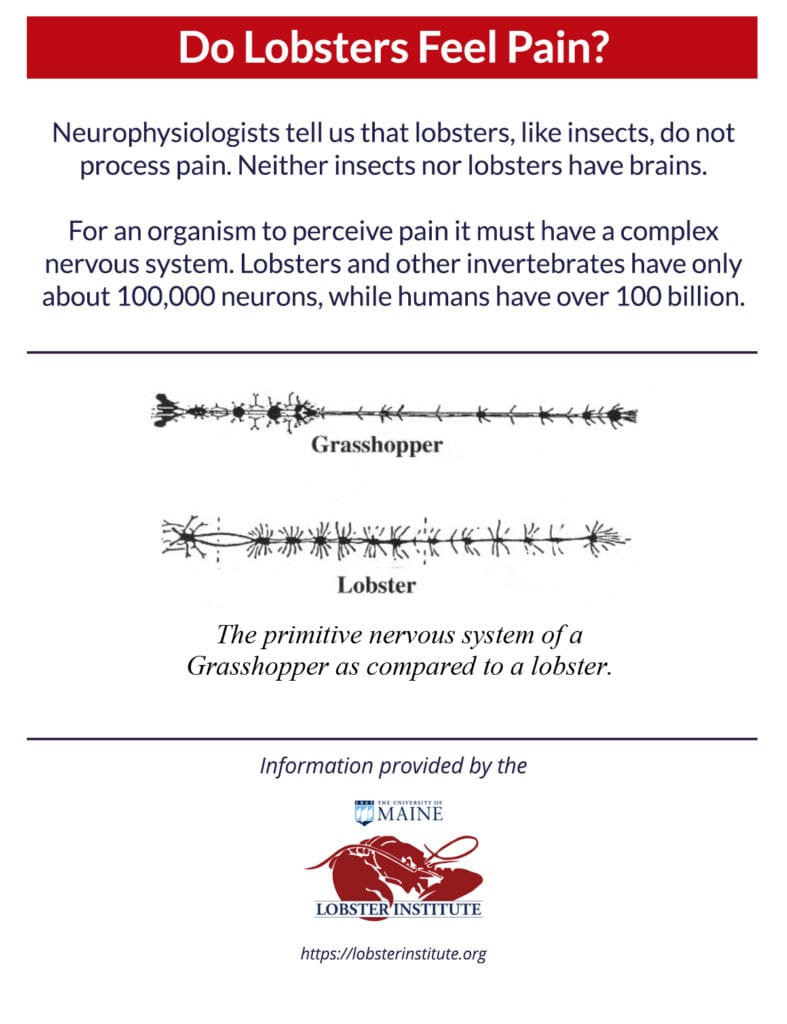 Some comments on… COOKING LOBSTER

These comments on cooking lobster were prepared by the Lobster Institute.
For more information contact:
Lobster Institute * 210 Rogers Hall * University of Maine * Orono, ME 04473
( 207) 581 -1443 * www.lobsterinstitute.org

For an organism to perceive pain it must have a complex nervous system. Neurophysiologists tell us that lobsters, like insects, do not process pain.

Why do lobsters twitch as they cook?

Researchers found that a few seconds after a lobster is dropped in boiling water it will begin to twitch its tail. The tail movement, which continues for approximately one minute, is part of a reflex action found in lobsters and crayfish (but not crabs).

Known as the “escape response”, it is a reflex action to any sudden stimulus – a reaction that was first identified by George Johnson in 1924. The lobster is reacting to an external factor, such as an elevated water temperature.

Can you stop the twitching?

There are several methods purported to “put lobsters to sleep” so they don’t twitch their tails when cooked. These include hypnotizing, slow heating, and chilling/icing. Experiments at the University of Maine determined that:

in the traditional manner causes a lobster to begin activity in 5-10 seconds and continue for 1–1½ minutes.

the lobster by holding its head down and rubbing it nearly doubles the length of time it moves.

in salt water from room temperature results in increased activity when the water reaches a temperature of around 30°C/86°F. This activity lasts 2-3 minutes and then subsides.

Seems to reduce the activity of lobsters. However, lobsters at the top of the steam rack may still be alive after 20 minutes when large numbers of lobsters are being cooked at once unless the steam is retained in the pot.

before cooking, by placing the lobster on ice or in a freezer (but not freezing it) delays the onset of activity about 30 seconds and reduces the duration of movement to about 20 seconds.

Researchers believe the best way to minimize the lobster’s movement time is to chill/ice it before dropping it in water that has come to a rolling boil. Hypnotizing, slow heating, and steaming increase the length and duration of activity during cooking.