In a world of wine drinkers, there are still hearty souls for whom a meal is not a meal without hops and barley. Seafood’s long been the neighborhood populated primarily by pairings of white wine, but today, there are so many flavors and subtleties to artisan beer that finding good pairings for lobster is a breeze.

Here are some of our favorites: 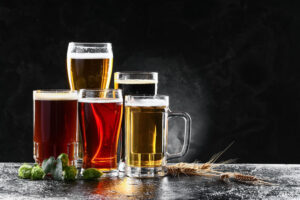 When lobster’s on the plate, beer aficionados generally seem to favor wheat-based Belgian witbiers or hefeweizens. Bright and flavorful, both match and enhance a lobster dinner, in part because both contain citrus notes, combining perfectly with the squeeze of a fresh lemon over the meat. Taste your brew before you squeeze, though – the citrus notes might be just enough for you. If you just can’t get enough citrus, you won’t go wrong with an unassuming medium-bodied beer like the commonly available Blue Moon.

Crisp German pilsners are also an excellent choice. These beers maintain their own flavors without disappearing into the full-bodied tastes of fresh lobster. Others like a pilsner as it serves to cleanse the palate without muddying the sweet taste of lobster meat. We’ve also been told than an India Pale Ale is a great choice with lobster, particularly if you’re dipping the meat in drawn butter as the bitterness in the hops contrasts remarkably with the savory butter and lobster meal.

Finally, light lagers are a perfect option for lobster, specifically lobster rolls. These mild and sweet beers can perfectly complement a lobster roll. They’re perfect for the summer when need a refreshing drink to go with your seafood.  Plus, light lagers are one of the most common beers around. Bud Light, Miller Lite, and Coors Light are all considered light lagers. You’ll be able to enjoy this pairing without the added calories of regular beer.

At the end of the day, though, the perfect beer pairing depends on your own preferences. The options we’ve listed above work for many people, but if they don’t work for you, then don’t sweat it! We’re positive there’s a beer-lobster pairing that you will love. You can always ask your local beer store or restaurant about what options they would suggest, too.

So, be sure to pick up your favorite beer from your local retailer, and don’t forget to order the tastiest, freshest lobster available from Cape Porpoise Lobster Co. Get your live lobster, fresh lobster meat or scrumptious lobster tails online or call us at 800-967-4268 to place your order.