A popular Maine seafood, shrimp can be cooked in a variety of ways to compliment any meal. Shrimp cocktail and shrimp scampi are just two of the most popular options. Past its delicious flavor, how much do you know about shrimp?

There are more than 2000 species 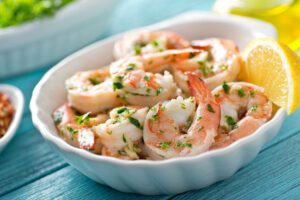 These bite size ocean dwellers play an important role in their underwater ecosystem. Found in waters around the world, there are more than 2,000 species of shrimp out there! Shrimp come in a variety of colors and patterns, from the white varieties found off the coast of Maine to the Asian tiger shrimp. Ranging in color from white to red, blue and yellow, with a range of unique patterns, many species of shrimp make it their job to clean the teeth of larger ocean dwellers. These cleaning shrimp wave their antennas, dancing in the water to attract the fishes’ attention. They then head into the fishes’ open mouths to clean up parasites.

The pistol shrimp is the loudest creature on Earth

One variety of this crustacean, called the pistol shrimp, is one of the loudest creatures on Earth. This tiny creature can be found in shallow waters in the Mediterranean Sea and has one normal claw and one large snapper claw. The disproportionate snapper claw is used to shoot a jet of water that is released at up to 62 miles per hour. This action creates a noise like a gunshot that can reach 218 decibels; almost as loud as the sperm whale!

Humans aren’t the only ones who love the taste of shrimp. From fish to sea urchins, starfish and dolphins, these tiny crustaceans are a popular underwater meal. Lucky for all of us shrimp eaters, the species re-populates extraordinarily quickly. Female shrimp lay from 50,000 to one million eggs at a time, and the babies hatch in less than a week!

Are these shrimp facts making your hungry? Visit Cape Porpoise Lobster Company online or call us at 1-800-967-4268 to place your next-day order for some of our tasty jumbo shrimp!