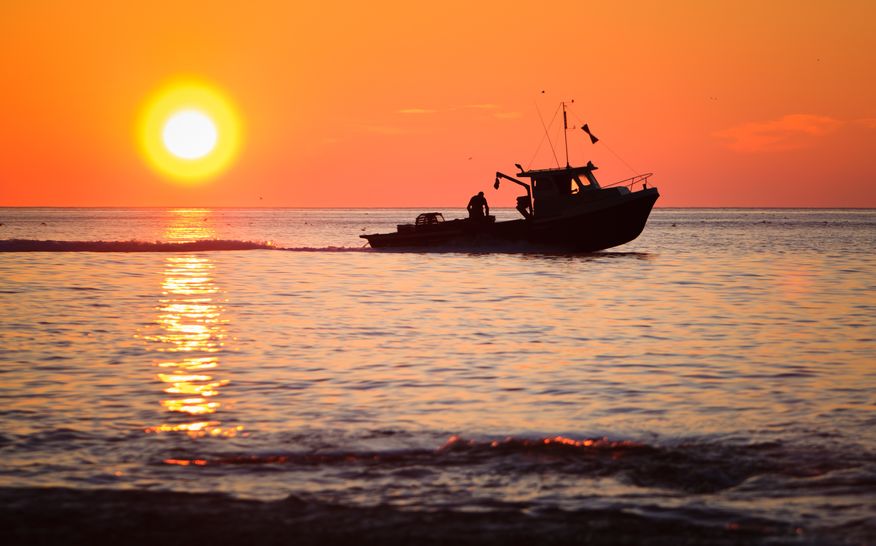 Humans have farmed New England lobsters for generations. We’ve harvested lobsters commercially since the 1800s, and the first recorded catch occurred in 1605, but it’s safe to say we’ve been fishing in the Gulf of Maine for much longer than that. And yet, one thing threatens this generational practice: climate change.

Big or small, warming global temperatures affect every aspect of life on Earth. The lobster population (and the industries that rely on it) are uniquely susceptible to changing climate patterns.

It begs to question, then, of what lobster fishing will look like in the coming years and what we can do to protect this quintessential New England creature.

Climate Change in the Gulf of Maine

Our planet relies on a delicate balance between various species and their ecosystem. One change—no matter how small—can tip the scales and throw an ecosystem into chaos. Overfish one species, suddenly you have another species taking over an entire area. Similarly, if you raise the temperature just a few degrees in one spot, it can affect another spot, even if it’s miles away.

The Gulf of Maine is considered one of the most dynamic environments in the world. This is in large part due to its unique positioning. Cold ocean waters from the Arctic flow down and mix with the warm waters of the North Atlantic. This mix of cold and warm water nourishes the local ecosystem, creating an abundance of marine wildlife and making the Gulf of Maine so advantageous to fisheries.

But It’s Getting Hotter

The Gulf of Maine relies on a delicate balance of cold, Arctic water and warm, North Atlantic water. When that balance is destroyed, it can threaten the entire ecosystem. This is what’s currently happening in the Gulf of Maine.

Warming global temperatures are melting Arctic ice and heating up the previously cold waters from the Arctic. This phenomenon has caused the Gulf of Maine to warm faster than 99 percent of the world’s oceans.

New England and lobsters—name a more iconic duo. Lobsters have been found in New England for longer than recorded history, but climate change is threatening the local population. It is also changing where lobsters live along the coasts of New England.

What do these numbers mean? At first glance, it appears that the lobsters from New York and Southern New England are packing up and moving to Maine. But this isn’t the case. Instead, the numbers represent how many juvenile lobsters are making it to adulthood. In New York and Southern New England, they are more likely to die young, while in Maine, they are more likely to grow into adulthood.

Lobsters can live in waters up to 68 degrees Fahrenheit (or 20 degrees Celsius). Anything warmer than that and they become distressed. This is why the lobster population is crashing in Southern New England and New York. Those waters were already warmer than the Gulf of Maine to begin with, so a few degrees higher can mean disaster for the local lobsters. Meanwhile, the Gulf of Maine has not yet reached that 68-degree threshold, even if the temperature has increased by the same amount.

Climate change also has an indirect effect on the lobster population. When carbon dioxide levels in the atmosphere rise, it causes the ocean’s pH level to drop (or to become more acidic). This process—known as ocean acidification—can affect a lobster’s shell strength and thickness. Some believe it makes them weaker and more brittle, while others believe it makes them thicker and stronger. Nevertheless, it is still something that could potentially hurt the health of the local lobster population.

As oceans continue to warm, lobster populations will be increasingly threatened. According to the Gulf of Maine Research Institute (GMRI), global warming could cut the gulf’s lobster population up to 62 percent by 2050. But there is hope.

Already, New England and Maine fisheries are practicing conservation to make lobster farming sustainable. Baited traps are built to allow small, young lobsters to escape while keeping old lobsters to be sold. Additionally, the State of Maine prevents the harvesting of extremely large lobsters or egg-carrying females. These practices ensure that the lobster population can continue to reproduce while still allowing humans to enjoy their favorite cuisine.

Cape Porpoise Lobster Co. is committed to protecting our oceans and our lobster populations. To learn more, contact us today.