What is a pescatarian? 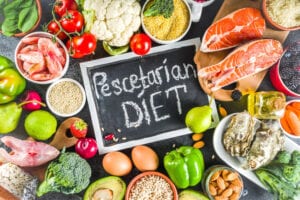 Pescatarians have a similar diet as vegetarians. They avoid meat, eat a mainly plant-based diet, but unlike vegans they will eat animal products such as milk or eggs. The difference is that pescatarians also eat fish and seafood, which vegetarians do not. Pescatarians eat fish as their primary source of protein, though of course they can have other sources like tree nuts and eggs.

Should you become a pescatarian?

An individual’s diet should be determined by their own health requirements and moral decisions. Nevertheless, there are substantial benefits to becoming a pescatarian. Below we list out just a few:

Following a pescatarian diet will bring many health benefits. Fish and seafood are excellent for cardiovascular health, and by cutting out red meat, you lower your risk of heart disease, diabetes, and obesity. In fact, pescatarians have a 22% lower risk of dying from heart disease as compared to meat-eaters.

A pescatarian diet can benefit our health, but it can also benefit the environment. Meat production is one of the largest world polluters. As such, by decreasing our dependence on meat, we can produce less of it. Fish and seafood production also have a lower carbon footprint than meat production.

How do you become a pescatarian?

If you decide that a pescatarian lifestyle is for you, then the rest is fairly simple. Since you can still rely on fish and seafood products, you can replace many of your meat dishes with fish. For instance, instead of having chicken fettuccine, replace the chicken with shrimp. Just be sure you keep a mental or physical list of the items you cannot eat, especially in the beginning. Here is a quick rundown:

What pescatarians can eat:

At Cape Porpoise Lobster, we offer many seafood products for you to choose from. Look through our website today to get started!