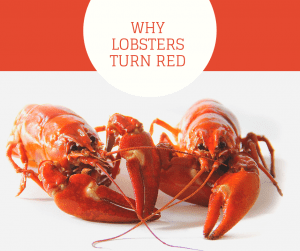 When you dig in to a plate of delicious lobster, the crustacean on your plate is a bright shade of red. However, lobsters in the wild look much different—they’re usually brown, green, dull blue or olive-gray. What causes the dramatic change? Science has the answer.

Lobsters have astaxanthin, a pigment that can absorb blue light, in their shells. Under certain conditions, this pigment makes the shell look red. When the crustacean is alive, the pigment is tightly bonded with a protein in the shell, called the crustacyanin. The pigment is wrapped up so tightly inside the protein that it stays put, unable to flow or absorb light. That’s why lobsters in the wild don’t appear red.

However, when a lobster is cooked, the boiling water changes its body chemistry. The astaxanthin pigment separates from the crustacyanin protein, which is not heat-stable.

Then they absorb blue light

Once free of the crustacyanin, it absorbs blue light and the lobster turns red. You’ll see the same phenomenon in crabs, as well as in shrimp, which are gray in the wild but pink when cooked. Next time you tuck into a delicious plate of seafood, take a moment to think about the fascinating science behind what we eat.

Now that you know why lobsters turn red when cooked, it’s time to order some lobster and get cooking! Call Cape Porpoise Lobster Co. at 1-800-967-4268 to get fresh live Maine lobster delivered to your front door in under 24 hours.