Healthy, versatile and delicious, lobster is truly one of nature’s best gifts. It’s no wonder, then, that lobster is such a popular dish across America and the world. However, while lobster graces the menus of many restaurants, few people know everything there is to know about lobsters. Cape Porpoise Lobster is here to fix that. We’ve listed some of the top facts about lobsters that you probably didn’t know. So, if you love lobster, you’ll enjoy learning some fun facts about this amazing crustacean!

Lobster wasn’t always appreciated the way it is today 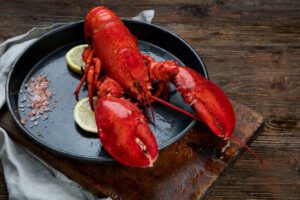 In Colonial times, lobster was considered a poor man’s food, only eaten by paupers and animals. My, how things have changed! Now, lobster is widely considered a delicacy and is often found at fancy dinners and restaurants.

Lobsters can regenerate parts of their body

When we humans lose a limb, they don’t grow back. We often have to use prosthetics. Lobsters, however, are different. Lobsters that lose a claw or an eye can usually grow another, although the replacement appendage will likely be smaller than the original. In fact, lobsters will amputate their own claws to escape danger from a predator.

Lobsters can get really big (though they usually don’t)

Most lobsters (especially Maine lobsters) are about 1 1/4 – 1 1/2 pounds.  However, they can get much bigger. The largest lobster caught in Maine measured 36 inches from nose to tail. In Nova Scotia, an even larger one was caught in 1977 – it was 3.5 feet long and weighed 44 pounds. Just think of all the lobster rolls you could make with that!

The Maine lobster fishery dates to the 1600s, and now contributes over $1 billion to Maine’s economy each year. Needless to say, the lobster fishing industry is a large part of Maine’s economy. Without it, many people would be out of work. That’s why it’s so important for us to protect the lobster population so we can enjoy lobster for years to come.

Lobsters can range in color

While many of us think lobsters are red, this color only appears when they are cooked. Lobsters can actually range in color, from brown to yellow and even blue. Odd-colored crustaceans are one in 30 million or so and are often caused by genetic defects and mutations.

There are two types of Maine lobster

Not all Maine lobsters are the same. In fact, there are two main types of Maine lobster. Hard-shell lobsters, typically caught from December to June, have a briny taste and are meat-dense. From July to November, New Shell lobsters are more prevalent. These have a sweet flavor and tender texture.