Salmon is delicious and healthy, but its taste, texture, and appearance can vary depending on the type of salmon you are dealing with. All types of wild caught salmon are found in the Pacific Ocean, while Atlantic salmon are all farm-raised. However, as you’re scanning the seafood section at your local grocery store, you’ll likely see a variety of names in front of you. More specifically, you’ll see six types of salmon: Chinook, Sockeye, Coho, pink, Chum, and Atlantic. 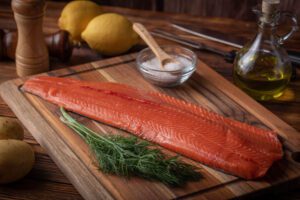 Chinook salmon is also known as King salmon, and for good reason. This is the best type of salmon you can find on the market. Fished from the Pacific waters of southern California, Chinook salmon is high in fat, and loaded with omega-3 fatty acids. It is also large, reaching up to five feet in length and over 100 pounds in weight.

Caught in the frigid Alaskan waters, Sockeye salmon are known for their striking red flesh—hence their other name “red salmon.” It has a richer flavor than other types of salmon and some describe it as having a “fishier” taste. Granted, they are smaller and leaner than Chinook salmon, but this makes them much more affordable than their royal cousins.

The skin of the Coho salmon is a bright silver. They are not as large as the Chinook nor as rich as the Sockeye, but they are nevertheless a good option for your dinner table. They offer a good fat content and a subtle flavor that works well when serving a whole salmon.

Pink salmon have light-colored flesh and a distinctive hump on their backs. They are smaller than most other salmon, and low in fat. As such, they have a milder flavor than most. Their small size makes them easier to harvest, and indeed U.S. fisherman catch more pink salmon than any other fish.

Similar to pink salmon, Chum salmon are lightly colored and low in fat. They are often sold canned or frozen. However, Chum’s roe (the ovaries of a female fish) is considered a delicacy in many cultures, and often considered bigger and tastier than the roe of other types of salmon.

The five types of salmon mentioned above all hail from the Pacific Ocean and are all wild caught. Atlantic salmon, meanwhile, is always farmed. This is because the wild salmon found in the Atlantic Ocean is a small and endangered population. Atlantic salmon is milder in flavor compared to its Pacific Ocean cousins, but they are large thanks to their special diet.

Cape Porpoise Lobster Co. has plenty of wild caught salmon that will be the talk of the table. Look through our website to get started!