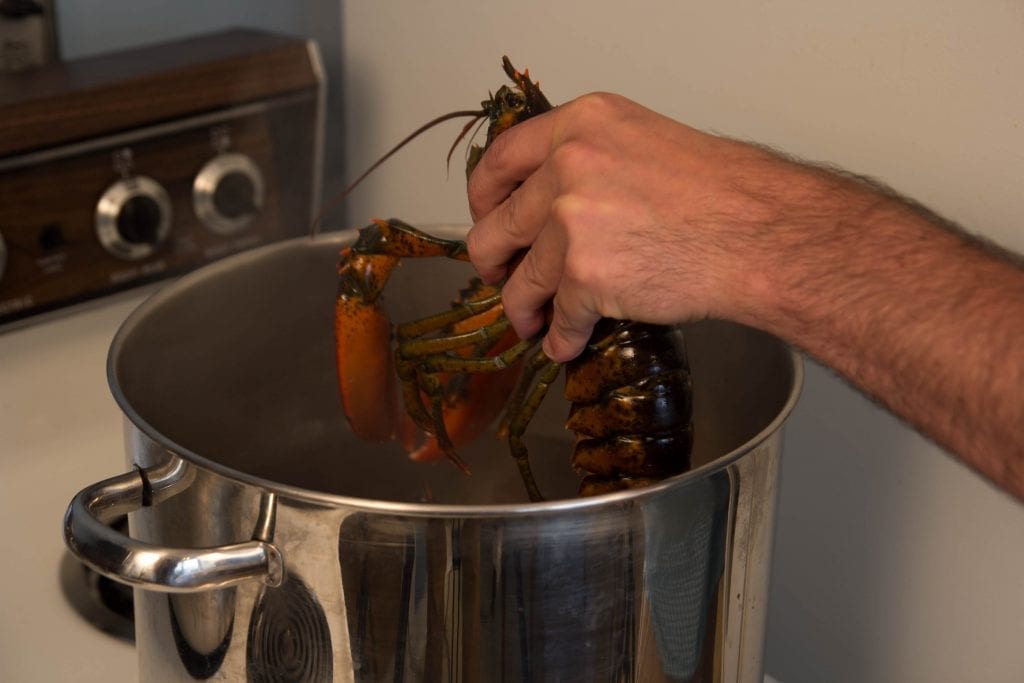 Our collective love affair with lobster knows no limits. Some people associate the crustacean with coastal living and dining. The sight and smell of a lobster brings them back to times spent walking beaches, fishing in the ocean and living the coastal life. Others just simply love the flavor and various ways to prepare lobster. From split lobster tails drizzled in butter to lobster rolls, bisque and everything in between, this seafood delicacy usually requires a thorough cooking and carapace removal process.

Here is a list of tips on how to properly boil live Maine lobsters, turning them from a rich brown to a satisfying shade of red. Go ahead and get your lobster bib ready. Once you master the art of lobster preparation, you’ll be ready to dig in!

To begin, fill a large pot with water and set it on the stove to boil. You can make a tasty cooking broth by combining the water with thyme and bay leaves. Squeeze the lemon juice into the water and then drop in the rinds. Bring the pot up to a high boil. It’s important to begin with a live lobster, as it tends to cook better. When a lobster is already dead, sometimes it will not cook properly or produce the best taste.

If your lobster was banded on the claws, cut them off so they don’t go into the broth you have created. Be careful when handling a live, un-banded lobster as it has very sharp pincers and claws that can be dangerous to the handler. And though the lobster is, at this point, still unaware of its impending future, it can still be pretty salty about being pulled from its ocean home.

Using a towel, grab the lobster by its mid-section, keeping its claws away from your body. Place it head first into the boiling broth. This way, the lobster doesn’t have a moment to suffer.

Cover the pot with a lid and begin boiling. Lobster cook times may vary depending on the size of the crustacean. Typically, a lobster weighing one to one and a quarter pounds will take about 12 to 15 minutes. For every pound, add five minutes. You will know the lobster is fully cooked because its shell will have turned bright red and the tail will have curled underneath the body.

To be sure, tug the antennae of pull one of the small walking legs. They should come off easily. The meat inside the lobster will be firm, white and the tomalley, which fills the body cavity, will be a greenish-yellow color.